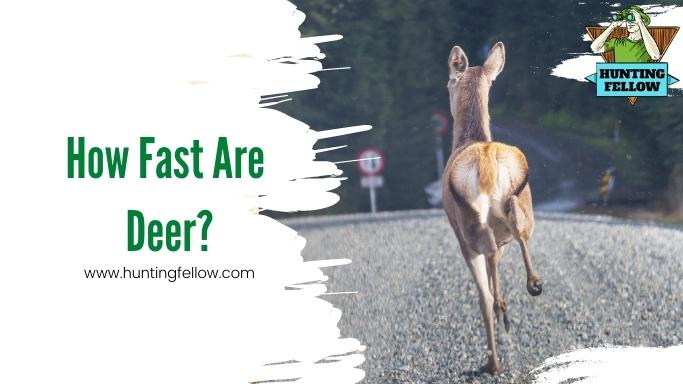 When you’re out in the deer stand, waiting for that buck to step into view, it’s important to know about the speed of deer. Knowing this information might help you decide whether or not you should take the shot.

Deer are known for being elusive and quick animals. Hunters often strive to learn as much as they can about their prey to increase their chances of a successful hunt. So, what’s the answer to the question – how fast can a deer run?

In this blog post, I’ll explore the maximum speed at which deer run. I’ll also look at some factors that may affect how fast a deer can run when confronted with danger.

Moreover, I’ll also do a speed comparison with other animals. So, whether you’re an experienced hunter or just getting started, read on to learn more about deer hunting.

How fast can a deer run?

Generally speaking, deer run anywhere from 20 to 30 miles per hour. Some deer have been known to reach top speeds of 35 or 40 miles, but this is rare. Of course, deer don’t always run at their top speed.

In addition, When running at top speeds, deer can only sustain this pace for about 300 yards before they need to slow down and catch their breath. Therefore, it’s so important for hunters to be accurate with their shots.

If you don’t take the shot when the deer is close, you may never get another chance, as they’ll be long gone before you can reload.

Now, let’s look at some of the other factors that affect deer speed. Several factors can affect how fast a whitetail deer can run. These include the following:

A deer can run at speeds of about 30 mph on flat ground. But if it’s running uphill, its speed is limited to around 15 mph. And if the terrain is slippery or marshy, the deer’s speed is even further reduced.

So why does terrain have such a big impact on deer speed?

It all has to do with physics. When a deer is running on flat ground, it can use all four of its legs to push off and generate forward momentum.

But when it’s running uphill, its hind legs are doing most of the work, which limits its speed. And when the ground is slippery or marshy, the deer has to expend more energy just to keep from sliding or sinking, which also slows it down.

The last time when I was out for a hike in the woods, I paid attention to the terrain and saw how it affected the deer I spotted along the way. I was shocked by how speedily they can move!

2. The Health of the Deer

A young, healthy deer will be able to run faster than an older deer that is not in good shape. As the health of deer affects their speed in several ways.

One is through the condition of their hooves. If a deer’s hooves are poor, it will have difficulty running quickly. Another factor is the deer’s level of fitness. A mule deer in good physical condition will be able to run faster than one out of shape.

Finally, the health of the deer’s muscles and bones will also affect their speed. If a deer has weak or injured muscles, it will not be able to run as fast as one with strong, healthy muscles.

In general, a healthy deer will be able to run faster than one that is not in good condition. Therefore, the health of the deer can have a significant impact on their average speed.

3. The weight of the Deer

The deer’s skeletal structure limits its top speed because it affects its acceleration; heavier deer take longer to reach their top speed than lighter deer.

Moreover, heavier deer have more inertia, making it difficult for them to change directions quickly.

4. The Fear they are Feeling

A very scared deer will run faster than one that is not as afraid.

Cheetahs can hit speeds of up to 70 miles per hour. But does that mean deer are always outrun by cheetahs? Not necessarily.

Cheetahs can hit speeds of up to 70 miles per hour. But does that mean deer are always outrun by cheetahs? Not necessarily.

First, it’s important to keep in mind that deer and cheetahs do different types of running. Deer are endurance runners, while cheetahs are sprinters. This means that deer can sustain their speed for longer periods, while cheetahs may be able to maintain speeds over shorter distances.

Second, deer have several adaptations that help them elude predators, including their zig-zag pattern of running and their ability to change direction quickly. These adaptations make it more difficult for predators like cheetahs to catch them.

So while deer may not be able to outrun a cheetah over long distances, they can use their agility and stamina to escape predators in the short term.

Now that we know how fast deer can run, you might be wondering if you can outrun one. The answer to this question depends on a few factors, such as average human running speed and the terrain you’re running on.

On flat land, you might be able to chase a deer if you’re a good runner. However, it would be very difficult to outrun a deer uphill or in a thick brush. And, of course, if the deer is scared and running at high speed, it’s unlikely that you’ll be able to catch up to it.

So, while you might be able to outrun a deer in some situations, it’s generally not a good idea to try. It’s better to be safe and let the deer get away.

3. Are Deer Faster Than Horses?

This question often comes up among deer hunters and other animals lovers alike. Several aspects can impact a race result between a deer and horses bred. So, as there is no definitive answer, it’s generally accepted that deer are faster than horses over short distances.

Whereas horses can maintain high speeds for longer periods than deer. However, deer can accelerate more quickly and reach higher top speeds. So, if you’re wondering which animal is faster, it depends on the race. If it’s a short sprint, the deer is likely to win. The horse will probably come out on top if it’s a long-distance race.

4. Are Deer Faster Than Dogs?

As you know, deer can reach speeds of up to 30 mph. In comparison, the fastest dog breeds can reach about 40 mph. So deer are not necessarily faster than dogs, but they can certainly reach high speeds when running.

When deer are running from predators or during the rutting season, the top speed of deer can be up to 45 miles per hour. So deer may not be able to outrun dogs, but they can certainly give them a run for their money.

5. Are Deer Faster Than Bears?

It’s important to remember that speed is not the only factor determining deer escapes predation. Bears are much larger and stronger than most deer, making them better equipped to catch prey.

They also have superior senses of smell and hearing, which allows them to detect danger before it has a chance to strike. In short, while deer may be faster than bears, that doesn’t necessarily mean they’re safer from becoming prey.

6. Are Deer Faster Than Wolves?

Wolves can reach speeds of up to 60 kilometers per hour when running speed at a full sprint. So, while deer may have the edge when it comes to top speed, wolves are no slouches when it comes to speed and is more than capable of outrunning their deer prey.

How Fast Can a Deer Swim?

Deer are strong swimmers and can swim for long distances if they need to. They usually swim with their heads above water, but they can also dive underwater to escape predators. The fastest recorded swimming speed for a deer is 13 kilometers per hour.

Deer usually only swim when they have to, though. They prefer to stay on land where they can run away from predators. So, if you see a mule deer swimming, it’s likely because it’s trying to escape something that is chasing it.

Now that you know how fast a deer can run, you’ll be better prepared the next time you’re out hunting deer. Remember to take into account all of the factors that can affect deer speed, and be sure to take your shot when the white tailed deer is close. With a little practice, you’ll be able to bring home a trophy buck in no time! Crossbows are unique in mechanism as well as features. The ease of shooting an arrow with a crossbow just by pressing the trigger comes after drawing the arrow at the certain draw weight required. Different crossbows have different draw weights depending on the size and mechanism. It can be between 50 lbs to even more… Yes, binoculars are great for viewing something far away. Whether you are a birdwatcher, stargazer, or astronomer, they will help you a lot. If you are wondering how far you can see with binoculars? What’s the limit? The question is, how magnified view can you get of an object at a certain distance with binoculars?… Are you searching about how to read topo maps for deer hunting? If you are a hunter, you must know that deer are not easy to hunt. Deer hunting can be challenging if you are doing it just as a sport, but if one has the patience, courage, grit, and equipment like deer hunting binoculars,…